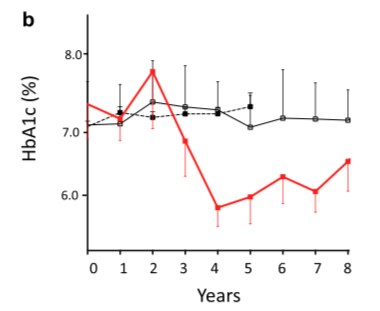 The Faustman lab at Harvard MGH has published a new paper with follow-on data for a previous RCT of a putative type 1 diabetes cure using the TB vaccine. I’ll rewind a bit for some context on the Faustman lab’s work.

Before 2003: Faustman lab and its extended academic family claim to cure type 1 diabetes in mice and rats, but it doesn’t work out.

2006 (free abstract, article behind paywall): Different group claims the mice in the 2003 study produced a substantial amount of their own insulin at the beginning of the trial, which means they aren’t really type 1 diabetics.

2012: Phase I human trial successfully shows nobody gets sick from the treatment. Maybe in part because the Faustman lab has a track record of somewhat over-promising on the curing-type-1-diabetes front, it is unable to get funding from the NSF, NIH, or JDRF. Instead they raise their money from individual philanthropists as well as a significant amount from small donors on social media. I think this unusual funding structure must have pressured them to amp up the promises.

2018: The new trial is an 8-year followup to the original trial. Gone is the bizarre reassignment from control group to treatment group. The new paper shows that there was originally no increase in C-peptide by the end of 20 weeks. However, there is a statistically significant increase in c-peptide starting a full four years after the trial ended (note that there was not further treatment). Although it’s statistically significant, the authors describe it as not enough to be clinically significant. However, around the same time, A1c drops to near non-diabetic levels in the treatment group and stays below the control group for five years. Everyone in the trial continued their usual diabetes treatment, so this was not a cure, but if the results hold up it is an extremely effective treatment to add to the usual course of insulin injections.

It’s odd that A1c dropped substantially even though the supposed mechanism of the treatment was not at play. Most of the paper is spent proposing a completely new mechanism. This part gets into molecular and cellular biology territory and out of randomized controlled trial territory, so I am not qualified to judge whether it makes sense. As to why the effect didn’t show up until three years after the treatment, the authors say “this crucial question cannot be directly answered by our clinical trial.”

A different explanation is that with a treatment group of 3 people this just happened by luck.

They’re already running a much larger phase II trial, so I’ll look forward to those results. Despite the weaknesses in this paper I have to acknowledge that it’s better than I would have predicted, so I’m more optimistic for the phase II results than I was based on the 2012 paper alone.