My second favorite how-to-115 topic after sunscreen is HEPA filters. In this post, I’ll cover speculative benefits of HEPA filters for all-cause mortality. I will not cover immediate benefits for asthma or allergies.

There are no long term prospective trials of HEPA filters, which is why the overall case is speculative. However, the mechanism for an effect, if there is one, is well understood and the intervention is cheap and easy. I love that I can pay less than $100 for a device I almost never have to think about but could make me live slightly longer. I have seriously looked into getting HEPA filters to shove up my nostrils, but alas there don’t seem to be any good products available yet.

Particulate matter below 2.5 microns, aka PM2.5, is the main constituent of smog. Sources of PM2.5 include them old-timey “cars” some people still operate, coal power plants, agriculture, and “soil and dust re-suspension.” A paper by Xing et al discusses several mechanisms by which PM2.5 can harm us. I don’t truly understand it, so I’ll just mention the buzzwords oxidation and inflammation. Since the biology experts seem to think it’s plausible, I’ll just trust whatever the experimental and observational data suggest.

As with smoking, small scale studies and cross-section studies eventually led to a large, long-term prospective study: the Harvard Six Cities Study. Starting in 1974, the researchers followed ~8,000 people for ~15 years. At the beginning of the study they asked the subjects about their health and smoking and gave them lung tests. Over the course of the study, average PM2.5 across the cities ranged from 11 – 30 μg/m3. However you slice the data or adjust for other health factors, people in the smoggiest city were about 30% more likely to die than people in the least smoggy city (see their figure below). Further analyses of the data here and here show that an increase in PM2.5 of 10 μg/m3 for just two days was correlated with a 1.3-1.5% increase in total mortality. 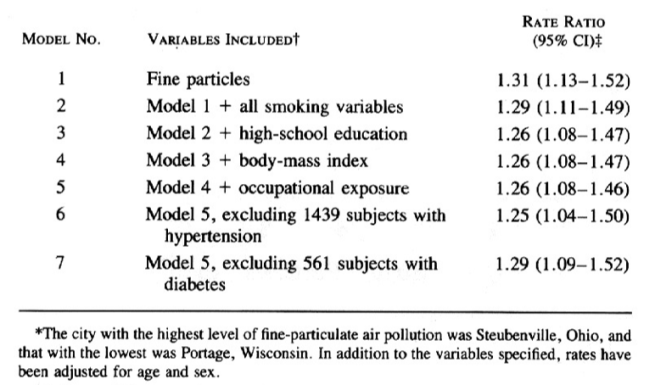 Is there a lower threshold where PM2.5 stops harming us?

Given that most US cities are already at or below the lowest pollution in the Six Cities Study, we need to look for a study of the dose response at very low levels of exposure. Shi et al give us exactly that (although they only study people over 65). They used satellite data for PM2.5 concentration at 1 km resolution and Medicare death records in New England over 5 years. This approach loses the patient-level detail about smoking and prior health, but it gives them better resolution for PM2.5 exposure and a sample size of over 2 million people. 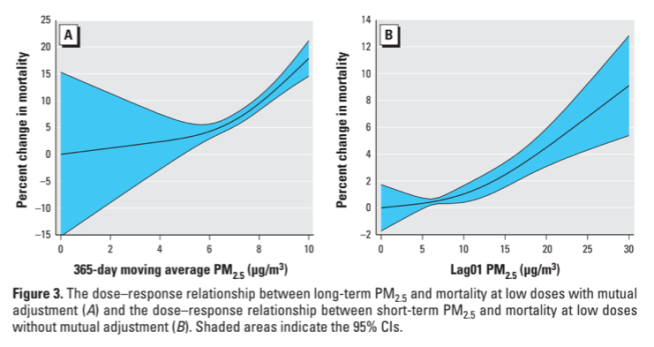 Another study, this one not restricted by age, by Correia et al used county-level data from 545 counties from 2000 to 2007. They don’t specifically try to fit a functional form for the dose response, but they report that the benefit of reduced PM2.5 was the same no matter what the starting level of PM2.5 was, suggesting both a linear dose response and the lack of a lower bound below which there is no benefit. In total, they found a gain of 0.35 years of life for a reduction of PM 2.5 by 10 μg/m3. The benefits gets closer to 1 year in urban areas for several definitions of urban. They have two guesses for why: 1) the composition of PM2.5 is different and more harmful in urban areas, and/or 2) the PM2.5 measurements in urban areas could more accurately reflect the actual exposure of the people who live there. In suburban or rural areas most people live miles away from where the PM2.5 measurements were taken and actual exposure may have lower correlation with the measured exposure than in urban areas.

Whether you keep your windows open or closed, the levels of PM2.5 in your house are highly correlated with those in the air immediately outside your house. People in developed countries spend more than 90% of our time indoors, so the indoor air quality is really what we should care about and is what we can personally control with HEPA filters (link, meta-study).

Although there are no long-term prospective trials of HEPA filters and all-cause mortality, a small, short-term randomized controlled trial in Canada (link) found that HEPA filters did in fact reduce PM2.5 indoors by 6.6 μg/m3 and caused some improvements in blood tests that could be predictive of long-term cardiovascular health. They also cite a study that found a reduction by 7.9 μg/m3.

A review of data through 2013 by William Fisk at the Lawrence Berkeley National Laboratory (here) supports the finding that HEPA filters do generally reduce the indoor PM2.5 level by more than a factor of 2. However, the benefit we humans experience may be smaller because it’s our own actions that often result in higher PM2.5 levels in our houses. He goes on to cite a number of short-term RCT’s with mixed results and laments that very large studies would be needed to determine a benefit for mortality.

Four papers cited by Fisk have modeled the health benefits of HEPA filters by pairing the known PM2.5 reduction of HEPA filters with the known health consequences of outdoor PM2.5. These studies all find that encouraging the use of HEPA filters is a very cost-effective public health intervention.

I live in an urban area, so it seems that a HEPA filter reducing my PM2.5 exposure by ~5-10 μg/m3 could make me live about ~0.25 years longer. Supposing I live 50 more years and I spend $100 on HEPA filters every 5 years, I’ve bought extra life at the cost of $4,000 per year. Although the evidence for sunscreen is much stronger, my estimated cost effectiveness is about an order-of-magnitude better than sunscreen.